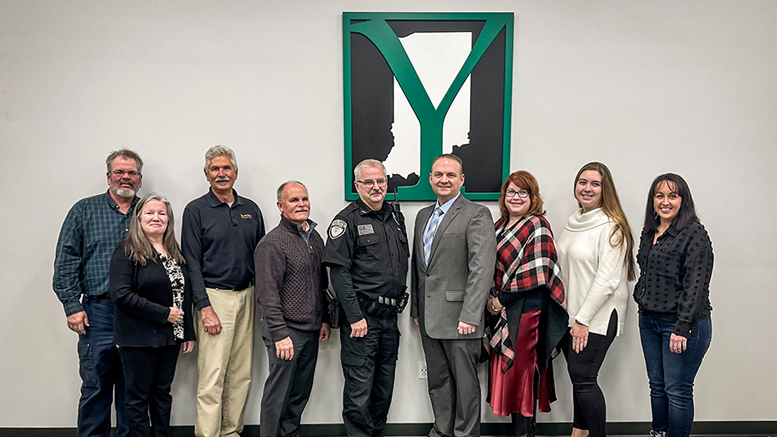 A 20-year law enforcement veteran has been named Town Marshal for the Town of Yorktown. Shane Ginnan, who most recently was Deputy Chief of Police for the City of Noblesville, assumes his new role January 7th. Yorktown Town Manager Pete Olson made the announcement. Read more about it on MuncieJournal.com

Before you eat that salad you just pulled out of your fridge, check the manufacturer first. Fresh Express has recalled bagged salad products in Indiana due to listeria contamination. The recalled items included Fresh Express, Marketside and Wellsley Farms salad products with product codes Z-324 through Z-350.

Three people have died from the flu this season in Indiana, according to the Indiana Department of Health. According to the weekly report, two of the people who died were between the ages of 50-64, while the third was 65 or older. Influenza-like illness activity is low across the state, according to IDOH.

The Sober Ride Indiana program is teaming up with Uber and Lyft to cut down on impaired driving over the holidays. In Fort Wayne and Indianapolis, $15 ride credits will be available for the first 2,000 redemptions (1,000 per city) from December 23 through January 1. Ride credits can only be redeemed between the hours of 5 p.m. and 3 a.m. To redeem the $15 ride credit, visit SoberRideIndiana.com. Click on “Redeem Ride Credits” and follow the instructions for the ride service being used.

Yesterday, the Muncie Board of Works approved the dedication of Bunch Boulevard north of East Jackson street so that the Kitselman Pure Energy Park can establish and obtain electrical power. Bunch Boulevard was rerouted as part of the larger Kitselman Trailhead project.

The final showing of Muncie Civic Theater’s production of “ELF” will take place this evening, December 23, so make sure you get your tickets at MuncieCivic.org. Masks are required inside the theater.

Our MuncieJournal.com’s Top 10 most viewed stories of the year continues with #4 – Muncie-Based Investment Group Announces Deal to Acquire Boyce Systems; #3 was RACER Trust, City of Muncie Agree to Terms on Purchase of Former GM Property;  And #2 was the story of the Buyer’s Market Opening Their New Store at the Muncie Mall.

The Muncie newspaper reports a Sunday night dispute over food preparation resulted in a Muncie man suffering a knife wound and his girlfriend’s arrest. Angela Danielle Jones, 38, was preliminarily charged with domestic battery with a deadly weapon, a Level 5 felony carrying up to six years in prison. Officers were sent to a house in the 3600 block of North Miami Avenue about 10:30 p.m. after 911 dispatchers received a hang-up call. A man there said Jones — reportedly his girlfriend — sliced his right hand with a kitchen knife. The man said after Jones had prepared food, he said it was too salty and asked her to make something else.

A Marion man is dead and a woman is in the hospital after an attempted murder-suicide. Marion police were called to a disturbance at the Prestwick Square Apartments just after 10 a.m. Tuesday. Officers arrived to find two people who had been shot. Talesya Sanders, 47, had gunshot wounds to the arm and abdomen. She was taken to the hospital. Her ex-boyfriend, 59-year-old Gary Pettiford, was found dead from a self-inflicted gunshot wound to the head.

The Innovation Connector has partnered with Ball State Sports Link and the Muncie Sports Commission to deliver a 6-week pilot program for Muncie Central and Muncie Burris High School Students. Students learn the fundamentals of sports media production and the program culminates in the students own live production.

Last night’s Powerball drawing could result in a whole lot of extra holiday cheer for one lucky winner. The jackpot was a whopping 378-million dollars, with a cash option of just under 276-million bucks. Of course, it’s never easy to strike it rich — odds of matching all five numbers plus the Powerball are about one in 292 million.

WTHR reports Indiana Attorney General Todd Rokita is suing the Biden administration over mask and vaccine mandates that apply to preschools funded by the federal Head Start program. The lawsuit, which 23 other states have signed on to, argues that the mandate is impractical in that it applies to children as young as 2 years old. Rokita asserts that the Biden administration bypassed standard notice-and-comment procedures by enacting the mandate as a rule from the U.S. Department of Health and Human Services.

To convince hesitant Hoosiers to get the coronavirus shot, one Anderson city leader wants to offer them cold, hard cash. City Council President Ty Bibbs proposes the city pay people $150 to get the shot. The first $100 would be given after two shots, and $50 more would be handed out after a booster shot. Bibbs says the incentives would be paid for using money from the American Rescue Plan. Anderson has a vaccination rate of 52%.

A nationwide search is being conducted by several police agencies investigating the disappearance of a 16-year-old girl Anderson girl. Jayda Johnson was last seen by family members on Dec. 8 when she was believed to have been lured or sneaked out of her mother’s home. Johnson is biracial, mixed with Black and white, and has brown hair and brown eyes. She is 5 feet, 4 inches tall and weighs about 130 pounds.

According to the Herald Bulletin, the Pendleton town court has applied for a $160,000 grant from the Indiana Office of Court Services to enhance security measures at the court building downtown. Judge George Gasparovic said representatives from the state’s Court Reform Grant program recently toured the building and provided recommendations for making the site more secure.